I normally use Nvidia Broadcast to control my camera, for its advanced functionality. This works well with Zoom, Teams, Slack, Discord, OBS, etc. But when I use Prezi I get the message ‘It looks like your camera is unavailable’ and I’m prompted to switch back to the Prezi Virtual Camera. I’m wondering if support for Nvidia Broadcast is on the roadmap for Prezi, especially given how many Nvidia graphics cards are out there? It seems a pity to lose a lot of the high-end functionality from Nvidia when using Prezi Video, given that so many other apps do support Nvidia Broadcast. Prezi, any plans to include?

Hello @Daniel_Fleming, please note that on Windows, only one application can use the camera at any given time. This means that if you would like to use several applications to modify your camera output, you would need to layer them accordingly.

In case Nvidia Broadcast creates a Virtual Camera, you should select this as input in Prezi Video. If your needs are different, then you can do the contrary and select Prezi Camera in Nvidia Broadcast.

I hope this helps!

PS I’m not opening a support request for this as it’s not a critical issue. I can always revert to the Prezi Virtual Camera.

Thanks, @Daniel_Fleming, for the details. I’ll look into this with our developers. I might open a support ticket if that’s okay with you, as I would need some diagnostic files. 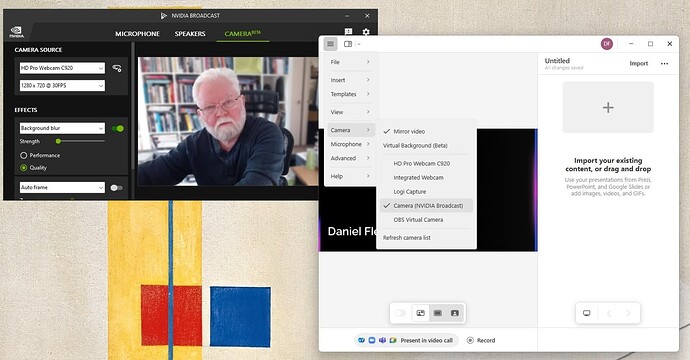 going in the other direction, Nvidia Broadcast can pick up the Prezi Virtual Camera as a source, but this way of course Prezi isn’t reflecting any of Nvidia Broadcast’s enhancements…

Hello @Daniel_Fleming, I’ll reach out to you via email so we can look into the issue in more detail.