OBS solution is backwards and other direction is broken

OBS support issue 1: This article on integration with OBS is helpful but when the Prezi Video is seen in OBS the image is frozen. This support article 171955 appears to have closed this issue. Put another way, here is the stream sequence that the article claims should work:

** OBS filtering like green screen will not work as it masks the colors in the presentation. It’s too late in the chain for filtering.

I do not use Prezi Video because of this limitation.

Hello @JJ_JJ, could you please check if this troubleshooting is solving the frozen camera issue?

@Bart The reference troubleshooting page produces “Oops! That page doesn’t exist or is private.” Searching for those keywords also finds nothing.

I tried the " OBS support issue 1: again this morning and the video is not frozen. I’m not sure what condition changed to correct the freezing issue. However, I’m interested in option 2 where OBS is the source feed into Prezi Video.

Hi @JJ_JJ, sorry about that, I’ve sent the wrong link.

Here are the steps:
Some logitech drivers update system wide registry keys that makes the logitech’s dll the default codec for the vidc.i420. Described in detail here:

In this case you should update the registry key to:
HKEY_LOCAL_MACHINE\SOFTWARE\Microsoft\Windows NT\CurrentVersion\Drivers32

Could you please give this a try?

@Bart My registry setting for that key is already set to the correct and advised setting:

More details. In Prezi Video, with OBS running, the list of cameras appears as: 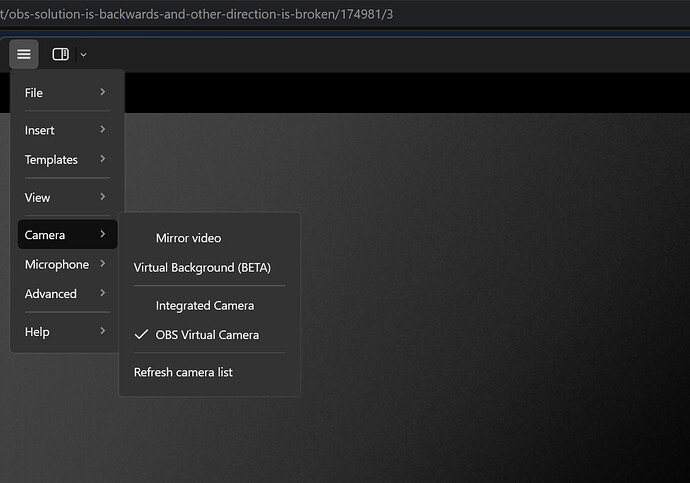 When I subsequently open Zoom, the same camera “OBS Virtual Camera” is selected and appears with the correct image (the white background image). 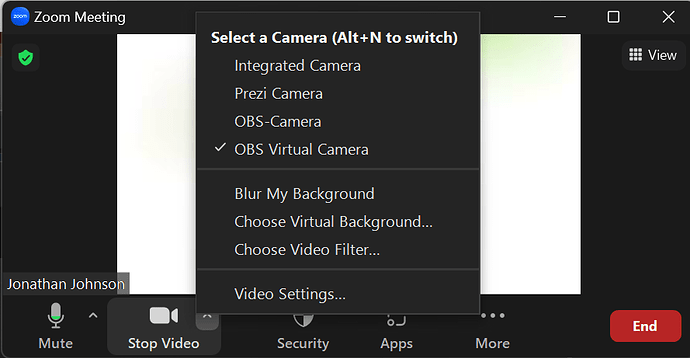 While Zoom can accept the “OBS Virtual Camera” and show the feed, the Prezi Video does not.

I noticed in Zoom there was another camera called “OBS-Camera”. This was a previous and deprecated version and now has been removed. After the removal, there is now just “OBS Virtual Camera” in Zoom, Prezi Video, and other video apps. Even with this removed this issue is still the same, the Prezi Video does not accept the “OBS Virtual Camera” feed. 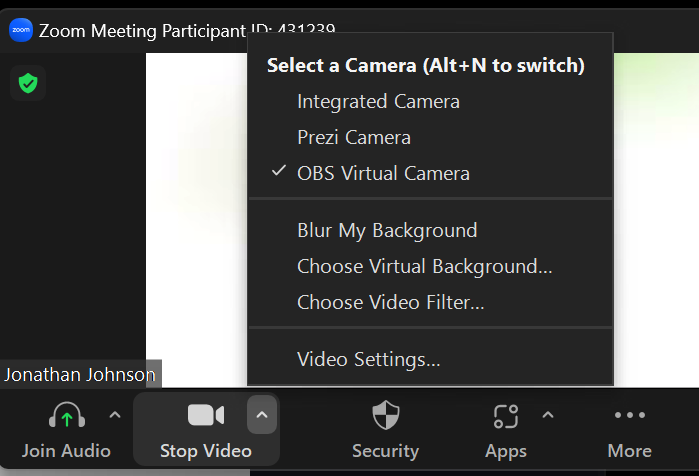 Thanks, @JJ_JJ, for the details. I’ve forwarded this to our developers for checking.

@Bart When I applied today’s release 29.0.0 of OBS the issue of selecting the OBS Virtual Camera appears to have been fixed. If this was due to the OBS new version, then it appears to be with the OBS virtual camera and not Prezi Video.

However, I’m shifting my focus to having a Prezi next scene streamed to a Prezi Virtual Camera with a transparent background, issue here